Thank you for joining me on the eighth episode of Sports Business Updates – my weekly podcast featuring the biggest sports business news from India and the rest of the world.

This week’s updates include the details on Pro Kabaddi Leagues strange yet not surprising media rights deal, Indian Premier League’s opening day TV viewership numbers and if the performance was better than last season, Dream Sports and will they become the first Indian sports-based startup to go down the SPAC route in the US market, How Puma is supporting talented Indian cricketers and Sony growing their football broadcasting portfolio with yet another deal for Copa America.

So let’s get into the details….

Our first update  is about PKL’s media rights auction.

The much hyped Pro Kabaddi League media rights auction has fired a massive blank with only one company entering the auction and that company is no other than Star Sports – The same company that owned the media rights before this auction! Star picked up the rights at the base price of Rs 900 crore.

Sony Pictures Networks India (SPN), the only other significant sports broadcaster, did not want to participate because of Star’s ownership of the league which is clearly conflict of interest.

The rights were auctioned by Mashal Sports, owner and organiser of the league. Star India owns 74% in Mashal sports and this conflict of interest has been a bone of contention between the franchise owners of PKL and Mashal Sports.

As  the deal stands for the next 5 years at the base price of Rs 900 crore, each team will get Rs 12 crore from a central revenue pool, since Mashal Sports shares 80% of its media rights with the teams.

In the past Star India had offered Rs 14-Rs 15 crore per year to each of the franchisees as their share for the next five years, but they had sought a minimum of Rs 22 crore per year. So, it’s clear who the winner is and why franchise owners are unhappy!

So much so that Ronnie Screwvala, the owner of the Mumbai franchise is looking to sell his team ownership! So, the question remains – Is there trouble brewing in the PKL universe? Only time will tell.

This week’s second update is about the opening match viewership numbers of this year’s IPL.

It has been reported that the Royal Challengers Bengaluru v Mumbai Indians match recorded a total watch time of 9.7 billion minutes.

According to Star Sports, nearly every third TV-owning household in India watched the opening match live.

However, the impressive 9.7 billion minutes viewed failed to match the 11.2 billion minutes IPL recorded in the 2020 season and this year’s figures only managed to beat the 2019 figure of 6.8 billion minutes. The viewership for IPL 2021 opener was 43% higher than IPL 2019, Star Sports said.

After raising $400 million last month Dream Sports weighs in on a $1.5-billion US listing

Our third update is about Dream Sports aiming to get a listing in the US through SPAC.

Dream Sports, the parent company of Indian Premier League fantasy partner Dream11, is in talks with banks about a U.S. listing, which could raise roughly $1.5 billion, valuing the company at $6 billion.

Investment banks Morgan Stanley, JP Morgan and Citigroup are among those that made presentations to the company in the first week of April. No firm initial public offering (IPO) mandate has been given and neither has the quantum of fundraising or the timeline.

There are indications that Dream Sports may tap a listing via a special purpose acquisition company (SPAC), or blank cheque company, in the US.

Harsh Jain, co-founder of Dream Sports, is a board member of Think Elevation Capital Growth Opportunities, a SPAC launched by Ravi Adusumalli and Shashin Shah focused on Indian tech companies seeking to list in the US.

Dream11 won the title sponsorship rights for the 2020 edition of IPL for Rs 222 crore and is one of the official partners. The company has also been associated with the International Council of Cricket, Indian Super League, Big Bash League, National Basketball Association, Caribbean Premier League, International Hockey Federation and Pro Kabaddi League.

Abhishek Ganguly, managing director, Puma India and Southeast Asia, said, “At Puma, we are committed to promoting new-age cricketing talent in India. Washington and Devdutt have displayed remarkable resilience and grit on field that’s led to their meteoric rise as athletes. We have always believed in supporting not just established players, but also talent with immense future potential. We will continue to partner with young athletes, also at grassroots to give back to India’s sporting ecosystem.”

It is believed that Sundar is also in talks with three other brands for endorsement deals.

Our final update from this week is about SPN’s acquisition of Copa America broadcast rights.

Sony Pictures Networks India (SPN) has acquired the exclusive television and digital rights for the 2021 Copa America across the Indian sub-continent. 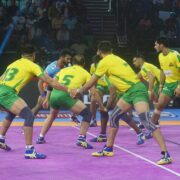 SBU Ep9: featuring news about the Indian Sports Industry size in 2020 and other sports business news